What’s your favourite bind off?

Oh that’s easy – it has to be the tubular bind-off. It’s everything I want in a bind off – lovely stitch work, a last bit of drama before the project is finally over, and a counterintuitively pleasing edge-free edge. But maybe best of all is that it feels like a secret between me and my hem, because to this day I’m not sure that anyone has ever noticed my bind-off except for me. It’s tricky to explain but on a recent bus journey home from South Ken, it dawned on me..

It was late. We were on our way back from a concert at The Albert Hall: District Line to Whitechapel, 253 bus back to Hackney. I’d not sat on the top deck of a bus down Cambridge Heath Road for over a year. My head was still full of the music from earlier as I stared out the window into the night. The bus pulled up at the stop opposite London Trimmings (biggest retailer of zips in western Europe for the sewists amongst you) and I noticed a neon orange object with pink and green antenna on top of the bus shelter sitting in a pool of street light.

Look. the Potato Art. It’s still there. Look everyone!

But the bus was already pulling away and they missed it. The bus continued down towards Bethnal Green. More bus shelters. Each one a stage for a single potato, brightly painted and studded with differently coloured cotton buds and painted matchsticks. The others in my party were paying attention now. We were all spotting and admiring the potatoes.

Some background may be helpful here: For as long as I can remember, East London has been home to a clandestine potato artist, who displays their work exclusively on top of bus shelters around Cambridge Heath and Hackney Road. Because of the height of bus shelter roofs, this tuber exhibition is only open to passengers on the top deck of double deckers. For curious knitters, I recommend the 55 or the 254 as there is also an excellent wool shop en route :o).

My potato art loving journey began on the 26 bus nearly 15 years ago, coming home with my then very young kids. They spotted an elaborately decorated one on a bus shelter by the Hackney City Farm and proceeded to squeal with delight as the spuds just got better and better at each subsequent stop. Quite apart from being stunning and hilarious works of art in their own right, there’s an unspoken, almost nonchalant conspiracy with the top deck passengers. This is art you enounter by chance. Initially you’re not sure whether the potatoes are there deliberately, or part of a craft project that accidentally got chucked out of a window from high above. But by the time you reach the traffic lights in Shoreditch you realise that the serendipitous seat you took upstairs, has made you part of a very select group – the top deck passengers –  who have access to this always-changing private view. Gloriously eccentric and at the same time invisible to the rest of the world down below. Could it be anymore compelling?

Ok, so now you want to know what the painted tubers have to do with a tubular bind off? Another easy one. Secret, delightful and unexpected, and just one more sign (as if any were needed) that everything important in life, is reflected in knitting. 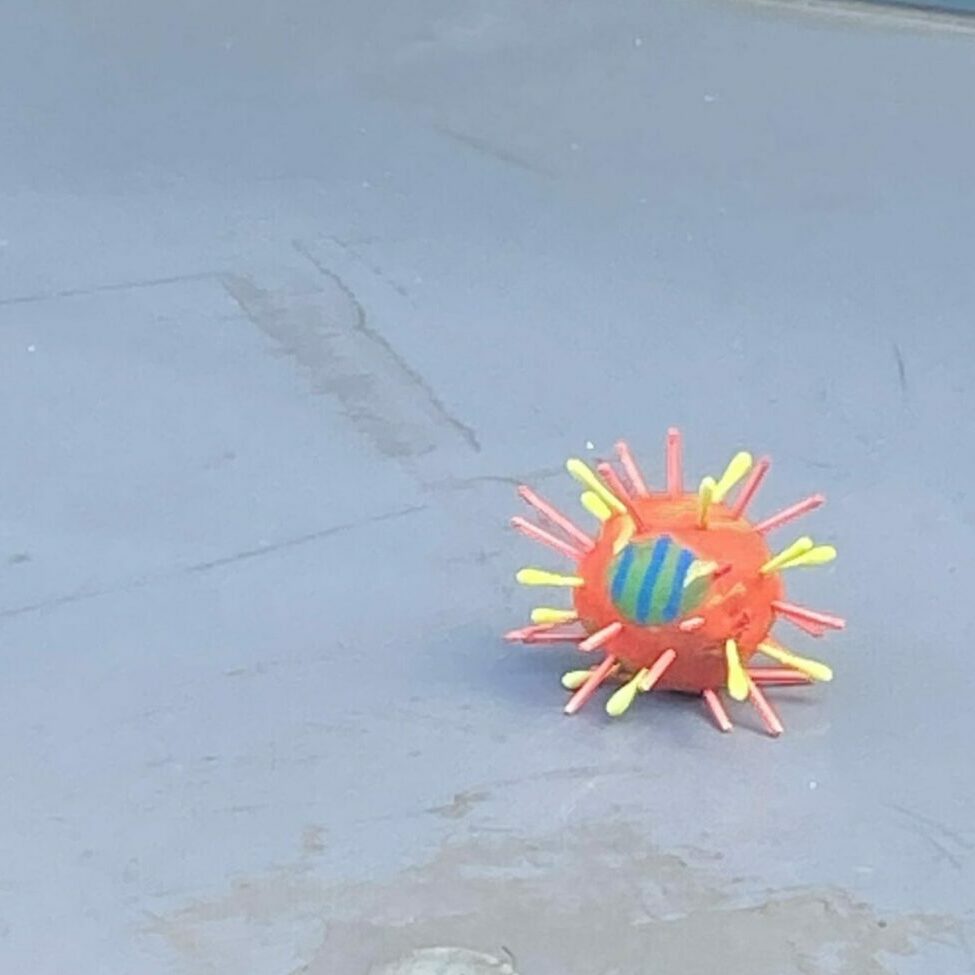 What’s your favourite bind off? Oh that’s easy – it has to be the tubular bind-off. It’s everything I want in a bind off – lovely stitch work, a last bit of drama before the project is finally over, and a counterintuitively pleasing edge-free edge. But maybe best of all is that it feels like a secret between me and…

← Knitting time
You are the champions →